A ready-made system, wireless. Where is the upgrade path? Where is the hobby? Two manufacturers show they are putting new tools in the hands of the audio hobbyist: System Audio and Buchardt. We’re going to show you how to tweak with these wonderful wireless systems.

In the live stream from january 9 we compared a number of wireless speakers. In this article, we want to specifically address whether wireless has anything to offer the tweaking audio enthusiast. You can read the review of both systems here.

Of course you have the option to connect better preamps and streamers via signal cables. But the charm is precisely the compact system and easy streaming via chromecast or airplay with apps from your preferred streaming services. For many people also not unimportant: wireless speakers minimizes the spaghetti of cables in the room. Of course, cables continue to run to the speaker, only in this case they are power cables instead of speaker cable.

So what options for tweaking do you have in wireless? Some are familiar, others are new as digital signal processing (DSP) opens new doors to customize the sound. But the manufacturer has to give you that option. Both Buchardt and System Audio use the Platin Hub and the app that comes with it. And that opens up a new world of possibilities. We list them below.

Wireless speakers and the Platin hub are still connected by a power wire, with all the potential influences that has. The Platin hub comes with a simple 5 Volt adapter. The first clearly audible upgrade is to replace it with a better adapter. The Platin hub is both the streamer and the WISA preamplifier. It is not the best, Primare, for example, provides a better WISA amplifier. With Primare you do lose the opportunities that the Platin Hub gives you to influence the digital signal processing yourself (at the moment of writing that is), more on that later. In the live stream, the Metrum Ambre was connected to the hub as a streamer, which already brings an improvement.

Tunings are instructions for how the amplifiers in the speaker are controlled. These are compiled by the manufacturer. They are easily installed with a USB stick on the speaker itself. Tunings are not meant to be a ‘profile’ that you can change at the push of a button, but a preferred option. You can choose what sounds best for you, in your living room. You can always change a tuning, no matter which WISA preamp you choose.

This is perhaps the strongest point of speakers that work with DSP; you can change the character of the speaker. Changing character is not like a chameleon. The most decisive factors are the built-in amplifiers, DACs, tweater and woofers used, and the design of the enclosure, but the difference is big enough to give time and attention to that.

My advice is to listen to a tuning for a few days before switching. Once the novelty is off you will really start to hear what it does for you. In the course of time new tunings are released or existing tunings are modified, so that as it were your speakers are upgraded software-wise. If you come from the world of passive speakers and analog amplifiers, this takes some getting used to. I am excited about it because the speaker adapts to you instead of you having to buy new speakers.

Both System Audio and Buchardt go further. Their systems are modular, making it possible to replace the hardware unit that contains the amplifiers and DACs for a new one even in the future. Of course this comes at a cost, but it is a sustainable solution with the advancement of technology.

Optimization with an app 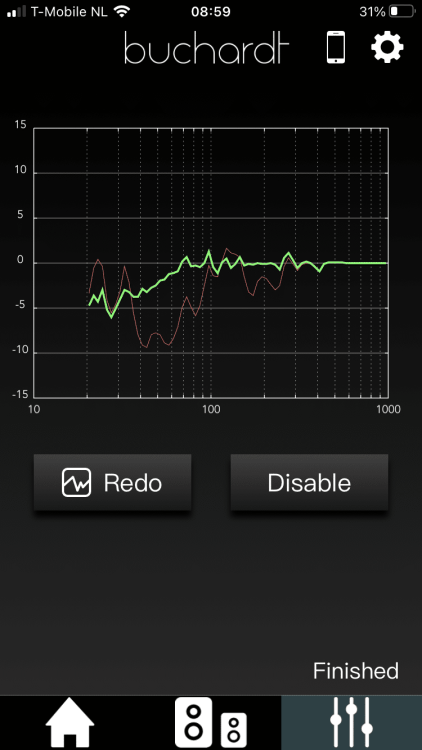 The acoustics of the room where speakers are placed plays a very big role in how the music sounds. Most living rooms are not optimal. Some amplifiers have correction software, such as Dirac, built in to fix problems. At Alpha Audio we are cautious about this; problems are best dealt with at the source and not tried to be circumvented. But not everyone will be prepared to convert their living room into a concert hall. And then it is still nice if the DSP in the speakers can be used to alleviate some of the problems.

The app of both Buchardt and System Audio gives the possibility for automatic straightening of problems with the bass, often the problem area in the average Dutch living room, putting everything back in the right proportion to each other. It works easily, but you have to have the Platin hub for it and an iPhone. There is no support for an iPad or an Android-based phone.

In the app, you indicate that you want to take a measurement. The speakers make a loud noise for a minute, and in the meantime you wave the iphone around as if you were portraying Bruce Lee in a game of hints, while trying to measure as much of your room as possible at least 1.5 meters in front of the speakers. The app then does the math and a graph comes out: The red line is the measurement, the green line the suggested optimization. The enable / disable button allows you to apply the correction and quickly switch between the two to hear what the effect is.

The graph looks fierce, but what you hear is more subtle than it seems. On the horizontal axis are the frequency range in Hz, on the vertical axis the measured relative deviation in decibels. The correction is definitely audible; it’s not a gimmick. The important thing is that the proposed correction is good. I will come back to this when making manual adjustments. A much better use of the measurement is to look closely at the red line and slide the speakers around your room, measuring over and over again, to find an optimal position. As you can see, my living room has quite a dip between 30Hz and 100Hz

Adjust it yourself in the app

With the latest firmware of the Platin Hub, new features have been added to the app. And that’s where the problem lies. As is often the case with software and updates, things sometimes go wrong. With your editor as well. One of the new options is to set the distance from your listening position to the speakers. After the update the left speaker was set to 10 meters and the right speaker to 0 meters. That had a huge impact on the sound, as if they were out of phase. The update on the hub had rolled out automatically, without notification, making it difficult to understand what was going on. Fortunately the importer was able to help me quickly, it was a known problem.

Buchardt Audio’s forum is a place to keep an eye on, problems and solutions are quickly discussed there. If you are allergic to these kind of IT-like problems, then a Primare WISA amplifier is a better option, even though you will lose the functionality to make adjustments. If you can live with this kind of inconvenience, then this is a fine option if you are a bit closer to your speakers than say 2.5 meters, it improves the listening experience. But it doesn’t stop there. For the true tweaker, the latest software update to the Platin hub offers the ability to adjust the sound across the spectrum. Various types of filters can be created. For the scope of this article it goes too far to discuss them all. If you start playing with them you will find out soon enough what each type of filter does.

Mads Buchardt gives explanations on his YouTube channel. The chance that you go too far is very high, but with a click you can turn it on or off so you can easily hear the effect of your adjustment live. You can use your own filters with or without the profile of the measurement via the iPhone.

After studying the red and green graph I thought in all my wilfulness that the area around 80Hz could use a small bump. After initially being delighted with my genius insight, after a while I found that I didn’t like the sound. The app’s correction was optimal. Filters that you like can be saved in a preset. A preset is one filter or a combination of several filters. The app allows stacking of filters, which allows you to go very far in fine-tuning the sound to preference.

A useful application is when you also use the speakers to reproduce sound from the television. A filter to optimize intelligibility of voices, think of talk shows or the news, is a nice option. But also if you want to adjust the sound for different music styles you have that possibility. In total you can save three different presets.

We use software to stream music, but among some audio enthusiasts, software still has a questionable image when it comes to adjusting the sound. The Platin platform used by Buchardt Audio and System Audio shows that a thoughtful combination of software and hardware gives you the ability to customize a speaker to your preferences and optimize it for its place in the home. That goes far beyond what you can ever achieve with cables. The digital world opens up more possibilities for the audio hobbyist to get to work with the sound in their home. To quote Imagine Dragons, “Welcome to the new age”.