The Korean audio producer Aurender has been creating streaming audio products for some time now. And they do that very well. Although the slogan: “The Future of Sound” is not quite ‘fresh’ or relevant anymore. Their line-up is. Models like the W20SE are – literally – leading. And the A10 was – for us – an eye – ear – opener. A model that actually makes the preamplifier superfluous. Time for the big brother: the Aurender A30. A Swiss Pocketknife…. uh… No idea how that translates to Korean.

Aurender is a relatively young audio company. It started in 2011 – under the name Widealab – with the Aurender S10. Harry Lee was the man behind this product. Now Aurender is a company with countless employees and numerous models. From relatively affordable to very exotic. The new Aurender A30 belongs with almost 19,000 euros to the last category. Although it is much more than a streamer. Let’s explain.

Streamer and much more

The Aurender A30 is a streamer that immediately stands out because of the gigantic display on the front: 22cm! By the way, it is not a touch screen. That seems crazy at first, but it’s no big deal: we don’t miss it at all.

On the left side of the front we find the headphone outputs (balanced as well as regular jack and minijack). On the right is a volume knob – in fact a rotary knob that works with a few optical sensors; to be honest, it feels a bit wobbly – and four buttons on the device to perform the basic functions. Above the display you can select the input and eject the CDs if necessary. CDs? Well, um… read on.

The Aurender is not only a streamer, but also a pre-amp, dac, upsampler, ripping station and a headphone amplifier. That’s quite a lot. In fact, with this Aurender A30 only a few active speakers or a beautiful, high-end pair of headphones are needed. This is a ‘just add speakers’ product. We love that. Especially if everything is put together decently. And that is certainly the case with this Aurender. 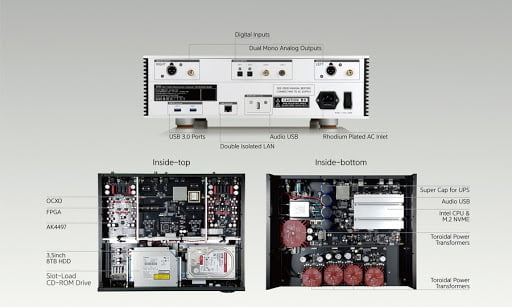 The basis of each audio component is the power supply. And yes: that’s also what this Aurender is all about. Each component has its own – linear – power supply. The dac, the drive and hard disk, the computer board (the ‘pc’, a motherboard with an ‘Intel-cpu’ and a nvme-boot drive), display and output stage. Everything is powered separately. The power supply is mounted underneath the audio boards, as you can see in the picture above. To get there, almost the entire player needs to be disassembled. We didn’t do that if you don’t mind.

The DAC consists of two AKM 4497 dac chips that are clocked ultra-clean with a bunch of thermally stabilized clocks. The output stages are shown left and right. The dac-chips are also placed there (in fact, more than half of a dac-chip works in the analog domain). In the middle is the signal processing section with an FPGA and the clocking. The Dac transmits both single ended and balanced. The AKM’s can process everything: from native PCM to native DSD to the highest sampling rates. The Aurender also supports MQA. In short: a true omnivore.

Since this is an omnivore, you will also find numerous inputs. Besides coaxial, bnc and optical in, we also see USB in and out (there is a dedicated USB audio output that is galvanically disconnected). And we see two USB ports on the back. These allow you to make backups, transfer audio and of course power devices. By the way, we almost forgot ethernet! Of course, you can find ethernet too. It’s also galvanically disconneted. And for the wifi freaks: unfortunately… no wifi. We do not miss it.

Then about the streaming sources. The Aurender supports native Tidal, Qobuz and Spotify and of course internet radio. In addition, there is a 10-TB hard disk and it is possible to mount a NAS. You can copy the complete music library from the NAS to the Aurender in just a few clicks. You can also transfer media from a USB drive, a network location and from CDs.

Yes, the Aurender A30 is a CD ripper. Attention has been paid to this as well. The drive is a solid Teac. That’s how we like it. And as you’d expect, after pushing in the CD, the ripping takes place in silence and all metadata is retrieved neatly. No manual tagging, unless, of course, you are going to feed very obscure CDs. Think of a rare UNKLE CD we have tried. The Aurender only found part of it… no cover art. You can of courrse add it later.

A perfect way to add or modify cover-art and tags, is to use the A30Manager. This separate app – which integrates seamlessly with the Conductor app – can yet only be installed on the iPad. iPhone and Android will follow. Via the A30Manager app you can specify the Aurender A30 in which formats CDs should be ripped. The app can also detect duplicates, adjust tags, add cover art, move folders and of course delete folders and files.