Why are we testing a studio converter again? Or even better: a universal converter that can convert analog to digital and digital to analog. With 1001 ways to switch it. What use is this to you – the hi-fi enthusiast? Well… that’s a very good question. The Grimm UC1 intrigued us; so we wanted to check it out and listen to it. And we’re glad we did!

There are simply put some devices that you plug in and…. it just adds up. In fact, there is very little to say about them because everything just falls into place. And the Grimm Audio UC1 definitely falls into that category. As do the Grimm TPM interlinks, Driade Flow speaker cable… Isotek filters (the bulk) and we could name a few more like that. But well: a review with just:

This device is just right …

… is a bit boring of course. In short: we’re going to see what else we can tell about it.

The Grimm Audio UC1 is a Universal Converter. And a headphone amp, pre-amp and master clock. Damn… that’s a lot of functions in one box. True. But fortunately Grimm doesn’t believe in price gouging. It will not offer a bargain of the century, only to skimp on quality here and there. No. For €4000 (ex VAT) you buy a complete product that in fact does everything right.

To give an idea. As a dac chip Grimm Audio has deployed an AKM 4396VF. And there are three in there (one per stereo pair). The ADC is a wonderful TI PCM4202. Internally we see, of course in a seperate housing, some famous clock crystals with circuitry. The extra housing ensures both thermal stability and it prevents resonances (the crystal is encapsulated by the way.

In this FLIR-picture we do not see the clock glowing, but a heatsink doing its job. The heatsink is between the shunt regulators and the bottom plate. Thus, the UC1 is passively cooled and therefore quiet. 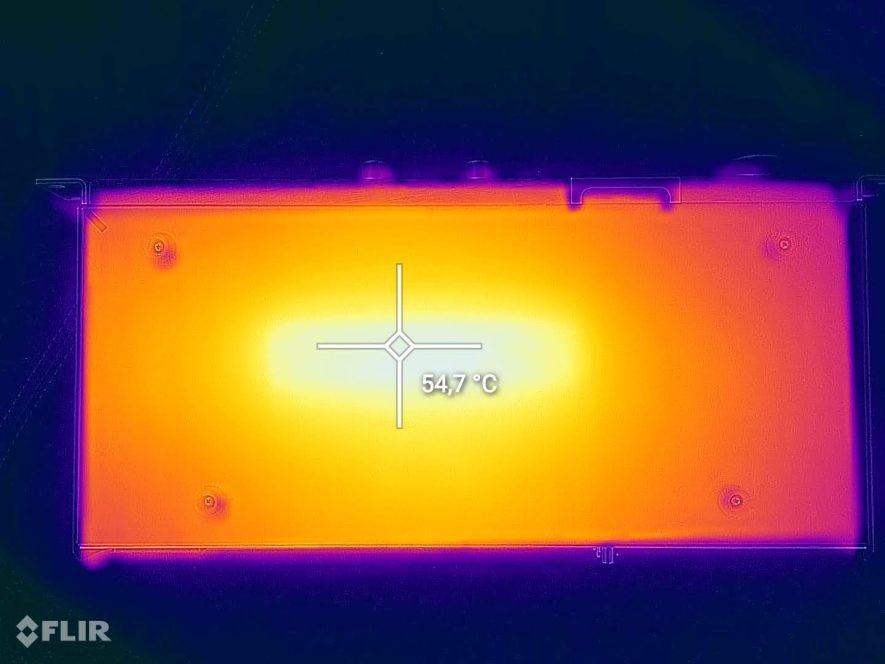 A few inputs and outputs

Note: this will be a long list. UC stands for Universal Converter. On the back are three sets of analog outputs: 1+2, 3+4 and 2nd Out. These can also be used as multichannel outputs. Then there is a USB input for 10 channels. Up front is another HI-Z input (line), a headphone out and a usb input (stereo) for phones and laptops.

Then we see on the back an analog input, two AES digital inputs, an AES output and an LS1 control port. Last but not least: a clock-in and clock-out. Oh, and a remote bus.

Now the question naturally arises: what is the point of having such a Swiss army knife for use at home? We would rather ask: why not? These kinds of devices are made to achieve an incredibly neutral reproduction. Without “embellishment” and unnecessary expense. Think of a sleek cabinet or an ultra-modern and luxurious screen.

Instead, you get a 1U enclosure (1 unit height in a server rack, about 4.5 centimeters) with only functional buttons and a menu where you, as a home user, set things up once and then don’t have to do anything except adjust volume.

The goal of studio equipment is mostly to provide maximum quality for a reasonable amount of money. It does not focus on luxury. It focuses on quality. And there’s a lot to be said for that, although we wouldn’t be quick to put a pair of austere studio monitors in the living room, because even in those cases, the eye also wants something to appreciate. However, the Grimm UC1 is certainly not an unpleasant device to look at. In fact, it just looks good. The ‘ears’ that we have on it for rackmount can be replaced for ‘hi-fi’ ears. And what remains is a sleek device that is quite acceptable.

Well, good. We’ll get further into how the Grimm UC1 sounds later. Spoiler… it sounds very nice… Of course, what’s also important: how easy does such a studio converter work? I

Honestly: ittakes some getting used to in the beginning. Partly because this device is not directly aimed at the ordinary consumer. There are studio functions in it that are of no use to you as a consumer (and that you probably do not understand). Think of a comparison function for two inputs. Useful for studios, because sometimes they want to test effects. Or what about foldbacks and routing of inputs and outputs?

You – as a home user – just want to select an input and throw it out through one output…. logical. But, that is possible. You select a ‘monitor source’ via the menu and choose an output (usually analog 1+2, but you can also control another amplifier or set of active speakers via analog 3+4. And then there is a 2nd out).  You can also select a source by pressing and turning the volume knob. Handy.