Wireless technology is convenient. Especially if you have to bridge long distances and a cable is not an option. Within an audio setup you can think of a surround setup where the rear speakers are difficult to reach. Or connecting a TV to the amplifier when the TV is in a different place. Until recently, there were no decent and affordable solutions. Solutions that sounded good. Let alone that there were compact solutions that made a lossless transfer of music possible. Nubert recently introduced the TRX: a wireless transmitter / receiver with a USB port and a combijack for analog and optical. Cool!

The best cable is no cable. Now you might think that for that reason wireless is better: there is no cable, pure radio waves, but that’s not necessarily better. RF also has its problems. Especially in combination with audio. But it would be great: the egg of Columbus. But we don’t have to ignore wirelessly directly. Wireless also has its advantages. No drilling holes, no cables through the room… Those are already two major advantages of working wirelessly.

The German company Nubert has had the NuConnect TRX in its line-up for some time now. A small box with a usb-c port and a combo-jack for optical and analogue. The Usb port is for power and serves as a dac-input. The combo-jack input works as an input for both analog and digital. In output-mode, it is only an analog jack-output. That’s handy to know.

Clever of Nubert, is that the boxes are all the same and that you can switch them between transmitter and receiver mode (how everything works, is in the manual). This is done by holding the button down for 8 seconds. You can tell by the colour codes which mode the TRX is in: green, pink and white is transmitter. Blue and yellow is receiver. These colors also indicate which input and output is active (switching between inputs and outputs is done with a short push of the button).

Now you’ll also have to pair the small transceivers in the beginning. This is done by pressing and holding the button on top for three seconds. In our case, they found each other right away. We assume that’s always the case. Incidentally, it is also possible to pair the NuConnect TRX with other wireless products from Nubert. Think of a nuSub XW series. Or a nuPro A-700 or X-3000. These also have wireless transmitters/receivers. So in practice it is also possible to capture a signal from an X-4000 with a NuConnect TRX and send it to a receiver. Interesting concept, because in this way you can realize a multiroom setup. 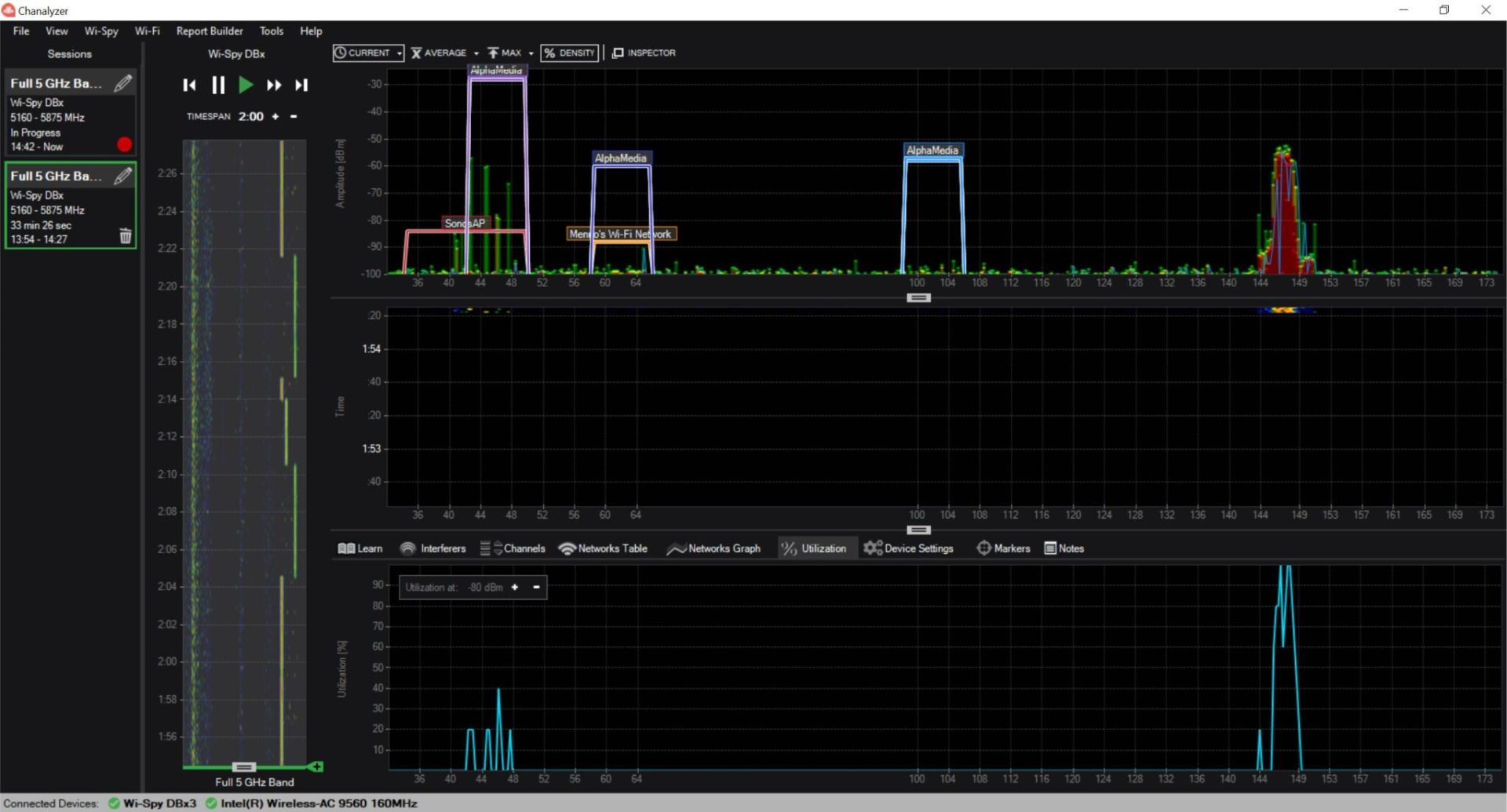 The Nubert NuConnect TRX connects over the 5GHz band and works in the wifi spectrum. So no WISA. That’s something to take into account. We have seen that the connection sometimes jumps between channels to get a better transmission (see the line on the left that jumps). WISA doesn’t suffer from that, but there are license fees. And that has to be taken into account in the product.

In our case, the connection is 100% stable. Partly because Nubert grabs a channel that is far away from the rest of the wifi accesspoints. Even though they do grab a DFS channel, which entails risks. If there is air traffic or, for example, a weather station nearby, it still has to jump or even switch off. But this didn’t happen in our test-period. And since Alpha Audio is located in Haarlem (near Schiphol), we do assume that this won’t happen elsewhere.