It’s weird, but in the price range of 1500 euros, there are few streamers to be found. In the entry level market they are some (a lot even). And above 1500 euro, too. But around 1500 euros very little. We don’t know why. We think it’s a good segment. Better than the Bluesound Node2i for example, and less pricey than a – for example – Lumin D2 or equivalent Auralic or something comparable. Wattson Audio has the Emerson Digital and Analog. Streamers with a price tag of – yes – 1500 euro! We are going to check ’em out.

If something comes from the land of beautiful mountains and crystal clear lakes – Switzerland in other words – you know immediately that it is not a ragged piece of electronics. Swiss people are known for precision. What they do, they do well. That’s the same with the Emerson streamers.

At first glance, it’s a normal piece of gear. Nothing special. Small, sturdy, but not really made to impress. No bling. But if you look further, you will notice that it is ingeniously put together. No visible seams, wonderfully solid terminals, very fast start-up times due to a capable processor (and good software) and the cooling is completely passive. So no fans. Yep: here too the Swiss have done a great job.

In our opinion, the Emerson Digital and Analog are made for simplicity. Plug it in… and play. No messing around with set-ups. And that’s quite unique, because most streamers still require something of a set-up. Either via Roon, or via the corresponding app. Not this one. Anyone can install this streamer.

So the story about the installation will be a very short paragraph, because there is in fact no installation. The whole thing is plug and play. In other words: connect the adapter – more about that later – plug in the ethernet cable and play. Of course a media-server has to be running and you need a UPnP app. But anyway: there are plenty of apps. We use BubbleUPnP. There is also their own app on iOS. Not yet on Android. Roon is also possible, but for now only via Airplay. Native Roon support is rolled out soon.

Depending on the version you have, you can send the signal digitally – AES or Coaxial – to a dac, or analogue to a pre-amp. This is done with a single-ended connection. 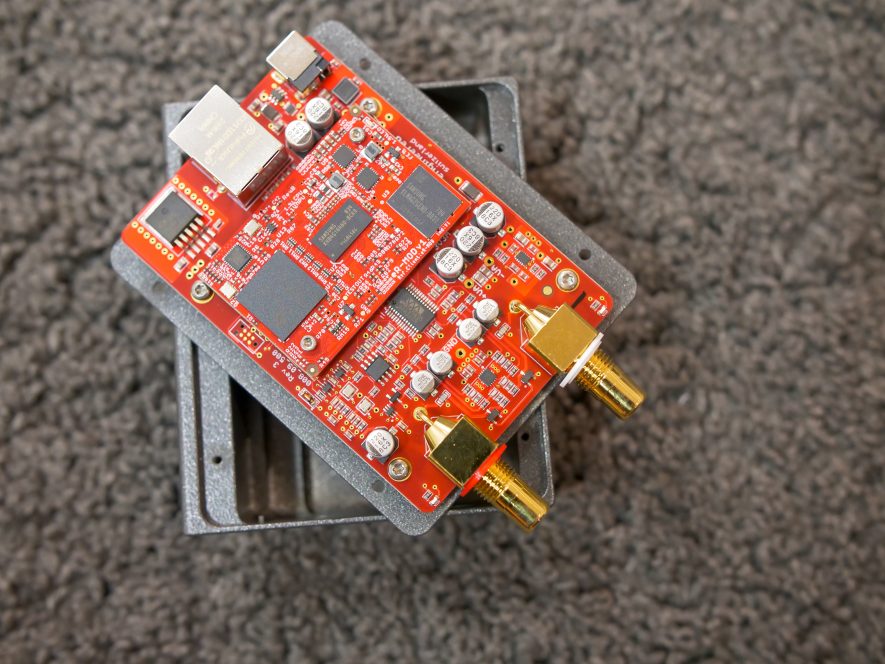 The cabinet of the Wattson Audio Emerson Analog and Digital is incredibly compact. So there is not much room for electronics. Wattson solved this nicely by initially positioning the cpu board – with a powerful ARM processor and decent Samsung RAM and Flash memory – above the audio board. The Wattson Audio Emerson Analog uses a WM8742GEDS dac from Cirrus (formerly Wolfson).