To cut to the chase, the Pass Labs X150.8 is our new reference power amplifier. And for good reason: it fits in perfectly with the XP-12 that we have been using for a long time. With great pleasure… The step up from the Bryston 4B SST3 to this X150.8 is no small one. The Pass is looser, more neutral and faster in character. That is nice, but it also had consequences: we quickly had to look for another reference speaker; the Focals are no friends with the Pass. So you see: two wonderful products, but the marriage is not optimal …

We have now had this Pass Labs X150.8 connected to several speakers. Think Sopra’s, a couple of Xavians, Diptyque, Final Audio Model 12, TAD Evolution 2 and it has been used in the Triple test monitor speakers. The power of this amplifier is that it unerringly shows what is going on in the system. Whereas the Bryston very often sounds nice (which is a very nice feature), this Pass is more of a transparent pass-through. Both have advantages and disadvantages; it’s just what you’re looking for. Your author is basically looking for a ‘measuring device’ to write decent reviews for you. However, of course, it’s nice if it sounds good too…. Fortunately, he does just that. More on that later. 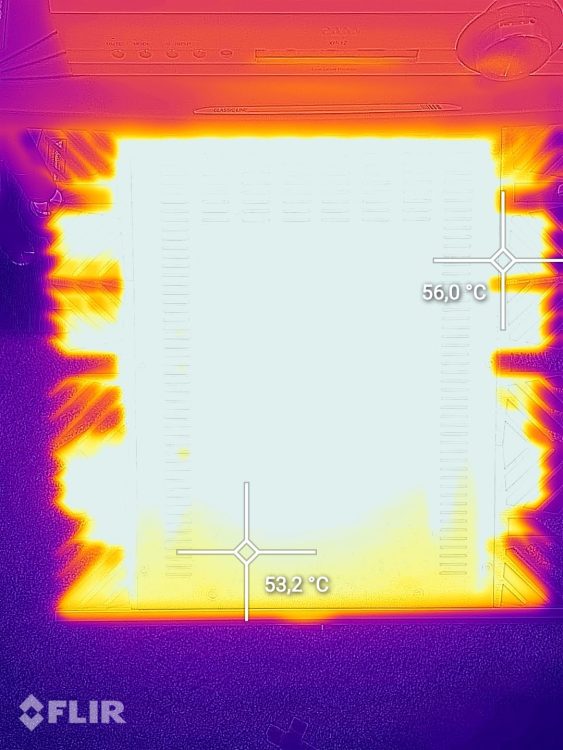 The Pass Labs X150.8 is basically a class A/B amplifier capable of delivering 150 watts into 8 Ohms. However, the class A bias is very high; almost 15 watts according to some sources, but we measure slightly more when we look at the measurements and calculate the idle consumption. It goes rather towards 20 / 22 watts. So in almost all cases you just play in Class A, which is nice. After all: no crossover distortion. However, the Pass gets very hot because of this high bias. Our FLIR camera indicates 56 degrees. And that is just powerd on, doing absolutely nothing.

If we take of the top, we see 10 transistors (FET) per side. And no less than 120,000 uF smoothing per channel. Centrally, we find an incredibly heavy toroidal transformer. Unfortunately, we cannot read the capacitance properly. It is striking how neatly this amplifier is made and boy…. what a lot of quality components! It should also be like this, given the price of 8750 Euro. But still it is nice to see that attention has been paid to the outside as well as the inside.

Centrally on the X150.8 (and all its siblings) you will see a display with a blue backlight. The needle is at about 10 o’clock on the X-series, and 12 o’clock on the XA. However, it practically does not move. How about that? A VU meter moves to the music, right? Yes, it does… but this isn’t a VU meter. It’s a bias meter. If it moves a little, we’re still in Class A with an X-series. If it goes up and down more, we’re towards Class AB or partly in Class AB.

Nerdy… yes… but yes: it’s Nelson Pass… the “Über-amp-nerd”. And that’s a compliment.

Despite the fact that the Pass Labs X150.8 weighs about 45 Kg and is still quite hefty, it is a sleek and somewhat slim-looking amplifier. Your author even thinks it’s chic though his better half thinks it’s a “mwah”-design. The pre-amp, the XP-12, she finds ugly, because it is not symmetrical and she finds symmetry very important. Anyway: tastes differ. Let’s move on…